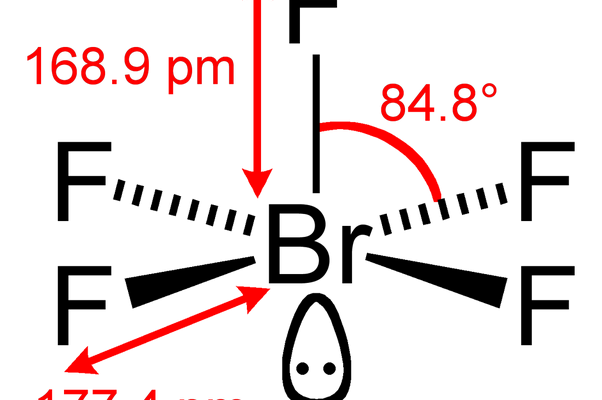 Bromine Pentafluoride or BrF5 is a fluoride of bromine and an interhalogen compound which means it is made up of only halogen atoms. In the liquid state, it is a colorless, fuming compound having a pungent odor. For human beings, bromine pentafluoride is highly toxic and must not be inhaled at any cost as it is corrosive to the eyes and inner membranes.

This compound is used to make chemicals for rockets as it can accelerate the burning process of the combustible materials used in them. Bromine pentafluoride releases smoke of hydrofluoric acid when reacts with water present in the moist air.

To begin studying the Lewis structure of bromine pentafluoride, it is first crucial to study the Lewis diagrams of participating atoms. The atomic number of Bromine is 35 where its electronic configuration is 1s2 2s2 2p6 3s2 3p6 4s2 3d10 4p5.

Here, it is important to understand that the electrons from the shells having the highest energy level, participate in the bond formation. In the case of bromine, those are the 4s2 and 4p5 shells, so, the total number of valence electrons in bromine is 7.

Besides this for Fluorine, its atomic number is 9 where its electronic configuration is 1s2 2s2 2p5. The valence electrons are present on the highest principal energy level, the total number of them can be calculated by adding up electrons in the sublevels of those principal high energy levels.

Now, let us study the steps involved to draw the Lewis structure of BrF5.

Step 1: Find the total number of valence electrons one molecule of BrF5 has: It is 42 as 7 is coming from each of the fluorine and bromine atoms.

Step 5: Now draw the structure by assembling the above-mentioned points: If you realize the structure will be drawn properly which we will discuss now. 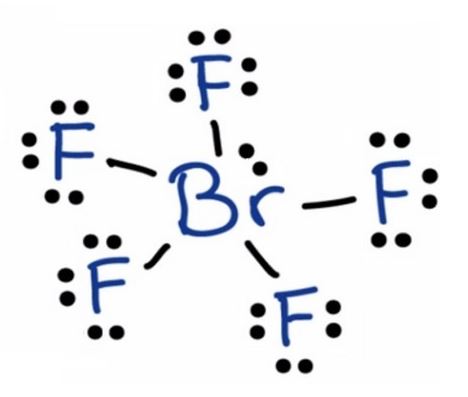 What is the anomaly in the Lewis dot structure of bromine pentafluoride (BrF5)?

When you begin drawing the structure, 5 fluorine atoms will be drawn around the central atom bromine. A single bond will be drawn between each Br-F interaction which means already 10 valence electrons out of 42 available are exhausted.

Now, after completing the octet of each participating fluorine atom, 40 valence electrons are exhausted in total. Still, we are left with two valence electrons which will be drawn on the bromine atom as lone pair of electrons.

But, as per the octet rule, the outermost shell can have a maximum of 8 eight valence electrons but bromine is having 12 as per the Lewis structure drawn for BrF5.

It is important to understand that chemistry is full of exceptions where Sulfur, bromine can also expand their octet to accommodate a greater number of valence electrons.

Bromine belongs to period four of the periodic table where elements of this group can easily expand their octet in case required by getting excited to a higher energy level.

The bond angle between each participating atom is 90 where the structure of BrF5 is square pyramidal. This can be studied with the help of Valence Shell Electron Pair Repulsion (VSEPR) theory, which says the overall shape of a molecule is decided by the total number of bonding and non-bonding electrons along with their orientation around the central atom.

These atoms are arranged in such a manner that the repulsion existing among them is minimal. It is important to understand that the electrons around the central atom tend to remain far away from one another. The structure of BrF5 could have been an octahedron but because of the presence of a lone pair of electrons, the structure rearranges itself into a square pyramidal shape.

This is the reason why their effect of repulsion is far greater than the bonding pair of electrons. 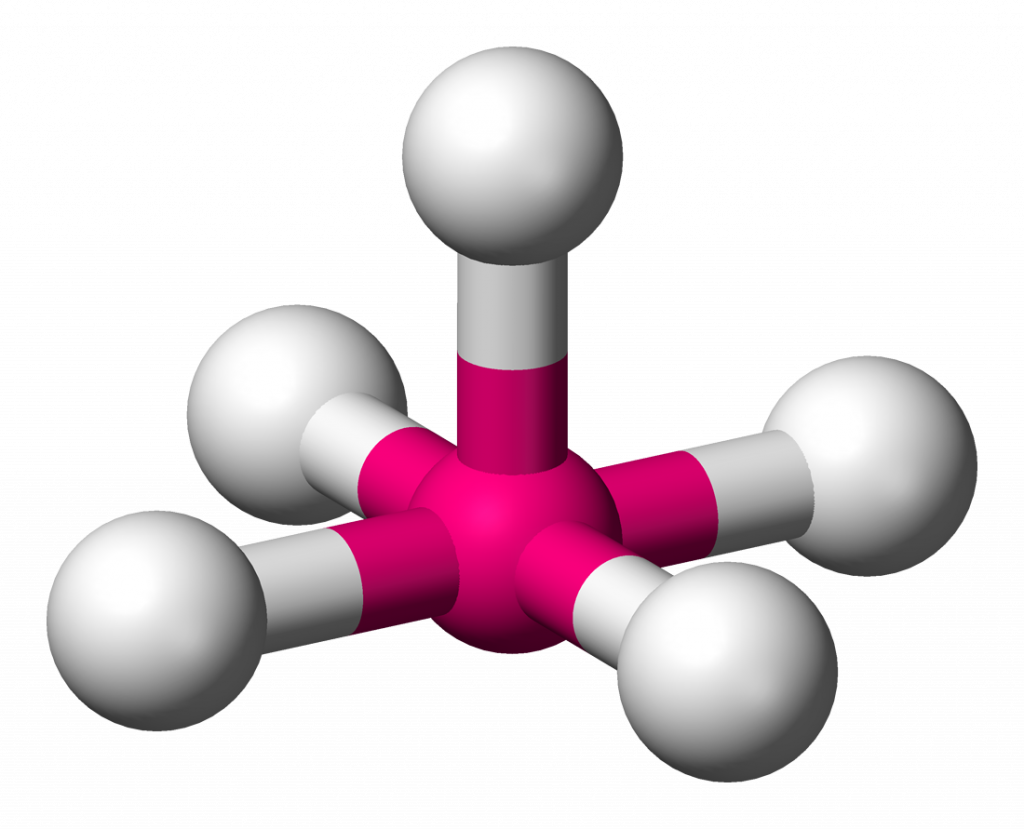 The hybridization of Br in BrF5 is sp3d2 as one 4s, three 4p and two 4d orbitals take part in the mixing and overlapping giving rise to new hybrid orbitals. To achieve the pentavalent status in bromine, some of the valence electrons move to the 4d orbitals.

Due to this, the two p orbitals become unpaired which sends the bromine atom in an excited state. Here it is when the hybridization process takes place. The left five valence electrons in the bromine atom bonds with the five fluorine atoms with the help of sigma bonds leaving a lone pair of electrons behind that can be found in one of the newly formed hybrid orbitals.

It is crucial to understand that the hybridization takes place when the atomic orbitals of similar energy mixes and overlaps in a manner like, s orbital with p orbital or s orbital with a d orbital.

Redistribution of energy takes place among the orbitals of similar energy, of individual atoms leads to the production of new hybrid orbitals of equivalent energy within a molecule. 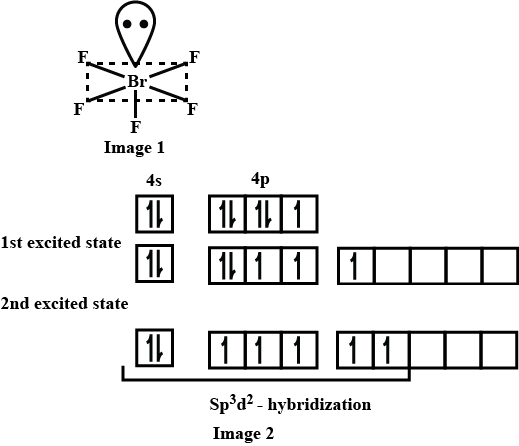 The value of this net dipole moment decides how strongly a molecule will attract shared pair of electrons towards itself, also either on the positive end or the negative one.

From the molecular geometry of bromine pentafluoride, it is clear that there will be an asymmetric distribution of charge on the central atom especially because of the presence of a lone pair of electrons. This is the reason why the BrF5 molecule will be polar in nature.

From the Lewis dot structure of BrF5, it is clear that the electron geometry of the molecule is octahedral where the electronegativity values of bromine and fluorine are 2.96 and 3.98. The difference between both the values is 1.02 which is greater than 0.4 so the BrF5 molecule is a polar molecule.

For detailed information, you can also read out the article on the polarity of BrF5.

As electronegativity is the tendency of a molecule to attract shared pair of electrons towards itself, the higher the difference between its values, the larger will be the polarity of the molecule.

One more explanation of polarity in the BrF5 molecule is the presence of a lone pair of electrons that is negatively charged and is not in association with the positively charged nucleus, the net dipole moment generates with making the molecular polar in nature.

Drawing the Lewis structure of bromine pentafluoride cleared that the bromine atom is showing an anomaly in this case. The anomaly is of expanding its octet to accommodate 12 valence electrons in place of 8. Due to this, the 5 fluoride atoms could bond with the bromine atom with the help of a single covalent bond leaving behind a lone pair of electrons.

It is this lone pair that changed the molecular geometry of the bromine pentafluoride to square pyramidal form octahedral. It is important to understand that the electron geometry is octahedron and there is no need to get confused between both.

Moreover, the hybridization of bromine in BrF5 is sp3d2 as one 4s, three 4p and two 4d orbitals are taking part in the mixing and overlapping giving rise to new hybrid orbitals. Lastly, the bromine pentafluoride molecule is polar in nature because of the presence of net dipole moment especially due to a lone pair of electrons on the bromine atom.