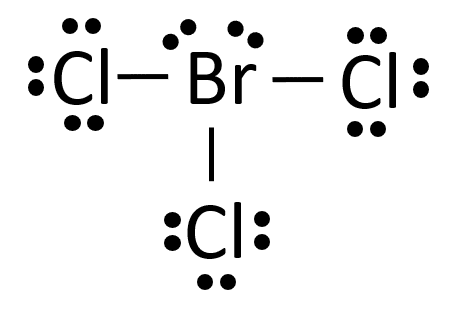 BrCl3 is an interhalogen molecule with a molecular weight of 186.26g/mol.

Interhalogen molecules are those which contain two or more halogen atoms and no atoms of any other groups. A number of the interhalogen compounds are unstable and are mostly covalent in nature.

Valence electrons of an atom are those electrons that are present in the outermost shell and take part in bond formation.

During bond formation, it is required to donate or accept electrons in order to fulfil their octate. These valence electrons help in the bond formation by getting accepted or donated by other species.

We see that in the outmost shell the number of electrons is 7(in 3s and 3p). Hence the valence electrons in chlorine are 7.

Octet rule refers to the tendency of atoms to have 8 electrons in their valence shell or attain the nearest noble gas configuration. Atoms usually having lower than 8 electrons react to form more stable compounds to complete their octet.

An exception to the octet rule is hydrogen which requires only 2 electrons to become stable attaining the Helium gas configuration.

The lewis structure gives a simplified representation of the valence electrons present across an atom in a molecule. It helps us in determining bonded and non-bonded electrons.

For BrCl3, the lewis structure reveals that a total of 28 valence electrons(7 from bromine + 7(3) from 3chlorine atoms) are required to form a single BrCl3 molecule.

Let us follow a series of steps that will ease our understanding of the methodology to draw lewis structure of BrCl3:

Step 1: Firstly, let us determine the total number of valence electrons in BrCl3.

We know that both bromine and chlorine belong to group 17 of the periodic table having 7 electrons each in their valence shell.

Step 2: Secondly, we will determine the electrons deficient in each atom to attain a stable electronic configuration. For bromine it is 1electron and for 3 chlorine atoms, it is 1 electron each to obtain an octet.

Step 3: Next, we will find the total number and the type of bond formation between the atoms involved.
For BrCl3, a single shared covalent bond for each is formed between the bromine atom and the 3 chlorine atoms.

Step 4: Lastly, we will determine the central atom which is usually the single atom present in the molecule.
In our case it is bromine.

Step 5: Now we will predict and draw the lewis structure of BrCl3 as shown below.

As it is visible, 2 lone pairs are surrounding the bromine atom whereas there are 3lone pairs on each chlorine atom.

This is how we predict and draw the lewis structure which gives us a better understanding of the bonding in molecules. 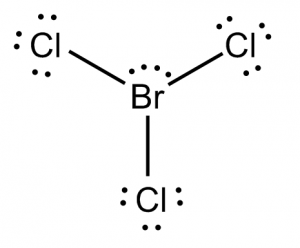 The Valence Shell Electron Pair Repulsion Theory(VSEPR) is used to predict the geometry of molecules. This theory assumes that each molecule will attain a geometry that minimizes the repulsion between the pair of electrons present.

The number of electron pairs surrounding the central atom can be determined by drawing the lewis structure of the molecule.

The geometry of the molecule will thus depend on the number of bonding as well as non-bonding electrons present on the central atom.

In the case of BrCl3 having 3 bonding pairs and 2 lone pairs around the central atom will correspond to a steric number of 5.

In this case, it would suggest us an sp3d hybridization. Because of the presence of two lone pairs, the geometry of BrCl3 will not ideally be trigonal bipyramidal but, will have a T-shaped geometry with asymmetric charge distribution.

The structure of BrCl3 is very reactive in nature. 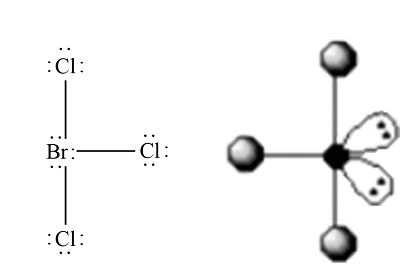 Hybridization is the intermixing of two or more atomic orbitals into new hybrid orbitals of the same energy, shape, and size. These new orbitals formed are called hybrid orbitals and serve the purpose of chemical bonding in valence bond theory.

Observing the hybridization of the bromine atom in BrCl3 we find that, bromine(Br) atom is sp3d hybridized.
In sp3d hybridization, one ‘s’ orbital combines with three ‘p’ orbitals, and one ‘d’ orbital having almost the same energy to form 5 identical hybrid degenerate orbitals.

Thus in the case of BrCl3 examining the valence shell electronic configuration we see:4s23d104p5. Now to bond with 3 Chlorine atoms, the Bromine atom should have 3 unpaired electrons so according to Valence bond theory, the bromine atom undergoes sp3d hybridization in order to attain the same.

Upon hybridization, the 3 new hybridized orbitals form 3σ bonds with 3 chlorine atoms leaving 2pairs of electrons in the remaining two orbitals which form the lone pairs.

The above explanation illustrates how 3σ bonds are formed in BrCl3 and how we get 2lone pairs surrounding the bromine atom. 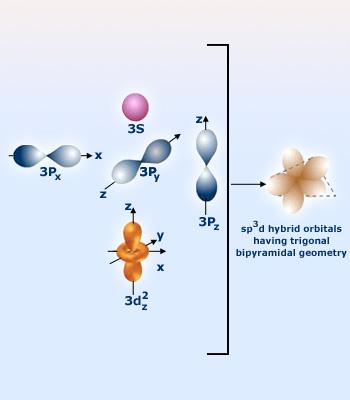 Polarity is the separation of charges in the molecule due to the difference in electronegativity of the atoms present in the molecule. This leads to a net dipole moment, with positively and negatively charged ends.

If we consider the structure of BrCl3 which is T-shaped having two lone pairs of electrons. We will find that because of the presence of two lone pairs the distribution of charge on the molecule is asymmetric and this distortion leads to the polarity of the molecule.

Also, the difference in electronegativity of the Br-Cl bond is 0.2 which gives us a net dipole moment in the direction of the chlorine atom.

All these reasons prove to us that the BrCl3 molecule is polar in nature.

From all the above results, we find the lewis structure of BrCl3 comprises 3 single covalent bonds between the bromine and chlorine atoms.

The hybridization of bromine in BrCl3 is sp3d formed by the inter-lapping of one ‘s’, three ‘p’, and one ‘d’ orbitals.
Being an interhalogen compound, BrCl3 is an unstable compound and not easily obtained. BrCl3 is polar in nature and the bond angle is distorted from the ideal due to the presence of 2 lone pairs.

This concludes an article on the geometry, hybridization, polarity, and lewis structure of BrCl3.