Bromine or Br is a Halogen found in the Group 7A of the periodic table. Its atomic number is 35 and the atomic mass is 79.90 u.

Bromine is the third lightest of the halogens and can be found in the form of both a smoldering reddish-brown liquid at normal room temperature and a reddish-brown gas.

Being in the same group as Fluorine, Chlorine, and Iodine, it exhibits similar chemical properties.

The elemental Bromide is extremely reactive and therefore does not materialize freely in nature.

In fact, it is available in the form of a soluble colorless halide crystalline mineral salt, like table salt.

Even though it is rarely available in the Earth’s crust, it is accumulated in the oceans due to the high solubility of the Bromide ion (Br-).

Bromine has 7 electrons in its outermost shell which acts as its valence electrons.

Just like the other halogens, its shortcoming of 1 electron in forming an octet makes it a potent oxidizing agent, and is, therefore, reacts with various elements to complete its need of 1 electron to form a full octet configuration in the outermost shell and attain stability.

Dibromine is formed when 2 atoms of Bromine combine to attain stability. Now, let us move to study the lewis structure of the Br2 molecule in detail.

A compound’s Lewis Structure depicts the arrangement of its underlying valence shell electrons.

The structure uses dots and lines to depict electrons and the bonds between 2 electrons, respectively.

The idea behind drawing the Lewis structure of the atom of a compound is to get an understanding of the chemical and physical properties the compound would possess.

Lewis Structure also gives an insight into the electron configuration of an atom and the way in which it can aim to achieve stability through equilibrium.

While the Lewis Structure provides an idea about the physical attributes of the compound, its representation is limited since it is a 2-dimensional model.

It also does not reflect upon the molecular design, geometry, or the 3-dimensional representation of atoms. below are the steps to draw the lewis diagram of the Br2 molecule.

Designing the Lewis Model of Br2

Step 1: The first task is to count the number of electrons in the valence shell of the atom. As we know that Bromine lies in the same group as Chlorine and Fluorine, Bromine has 7 electrons in its valence shell.

In the case of Dibromine, the combined number of valence shell electrons increases to become 14 for Br2.

Step 2: Next, we need to draw 2 Bromine atoms adjacent to each other. The 2 atoms are connected through a chemical bond, represented by a straight line.

This way, we have exhausted all available valence shell electrons.

Both the Bromine atoms enter a sharing system to fill their remaining slot of 1 missing electron and therefore achieve stability.

Step 5: Next step is to mention the name of each atom, both of which are connected through a straight line and lie adjacent to each other.

Since both the atoms belong to the same element, the bond angle here is 180 degrees, which means that both the atoms are exactly opposite to each other.

This forms the Lewis structure of Dibromine, which is finally represented as follows: 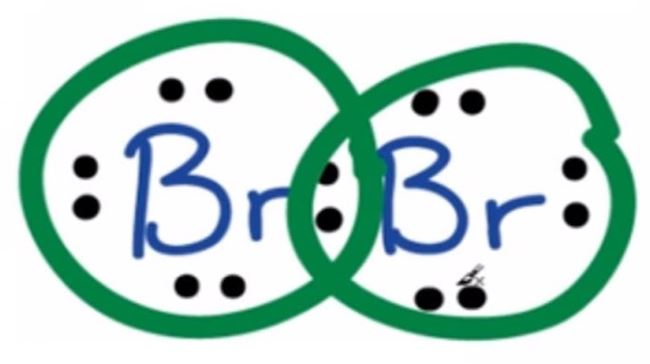 The need to understand the reason behind why a compound looks or feels or reacts the way it does, lead to the concept of Molecular Geometry.

Adding to the findings of the Lewis structure, Molecular Geometry is the study of different elements by drawing a 3-dimensional figure of the underlying atoms.

Molecular Geometry also helps one to understand the actual occurrence of the atoms of a compound in 3-dimensional space along with the bond angle and the bond length between two electrons.

The depiction of atoms in 3D also gives an explanation of the physical and chemical properties of a compound, such as its color, smell, shape, magnetism, reactivity, potency, and resistance among others.

While these properties assert the various uses a compound would have in the real world, it is also noteworthy to understand the different categories of molecular models that are used to classify the plethora of natural and artificial compounds.

The various categories are as follows:

In the case of Dibromine, or Br2, both the Bromine atoms have 7 electrons in their outermost valence shell. The need is to fill up the vacant electron spot and attain stability.

To do so, two Bromine atoms combine with one another to seek the missing valence shell electron.

The binary molecule of Br2 is non-polar as the bond between the 2 atoms is nonpolar.

Due to the presence of atoms of the same element, the molecular geometry of Dibromine is Linear and the compound has a symmetrical shape.

The bond angle is 180 degrees and both Bromine atoms come into an electron sharing schema. 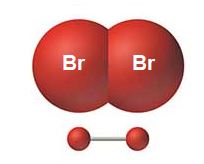 The goal of any naturally occurring element is to attain stability. To attain stability, release energy and attain an equilibrium, different elements react with one another forming compounds.

Since the formation of different compounds gives them various traits and therefore uses, the need to understand and mold a chemical reaction to optimize the requirement of a compound is important.

This is what gave birth to the idea of Hybridization.

Hybridization and the concept of VSPER theory together give is a greater understanding of the need for a compound to achieve stability and equilibrium.

According to the concept of hybridization, orbitals that are similar in energy level can amalgamate with one another, therefore, giving rise to new, dissipated orbitals that have lesser energy but are more stable and therefore, a hybrid of the previous two orbits.

These new hybrid orbitals are not like the previous ones in the sense that the valence shell electron arrangement and energy level are now different.

Since all elements have a different arrangement of valence shell electrons, the resultant hybrid orbitals are also different.

It is also worthy to note that both half-filled as well as fully filled electron orbits can participate in hybridization.

In the case of Dibromine, the valence shell electrons are 7 each, therefore 14.

In order to achieve stability, each Bromine atom comes into sharing with each other to complete the octet.

Hybridization of a molecule = No. of sigma bonds + No. of lone pairs

There are 3 lone pairs and 1 sigma bond present in the Br2 molecule.

Therefore the hybridization of Br2 is therefore SP3. Its structure is Linear.

A quick way to learn the concept of the hybridization model is as follows:

Step 1: Check the central atom and count the atoms connected with it.

Step 2: Next step is to count the number of lone pairs.

The MO diagram or Molecular Orbital diagram is an extension of the 3-dimensional molecular design and gives a better understanding of the structure of an atom.

Br2 is a simple compound as it is formed by 2 atoms of the same element. It is homonuclear diatomic, therefore, all the orbitals are compatible.

Here, since there are just 2 atoms, they use the compatible orbitals with the highest energy by forming an internuclear sigma bond on the axis.

To conclude, the chemical and physical traits of Dibromine can be understood by studying the Lewis structure of the compound.

Further analysis through the 3-dimensional structure lends valuable insights regarding the physical arrangement of the compound, thereby justifying it is varied uses in pharmaceuticals, medicines, chemicals, and photography.