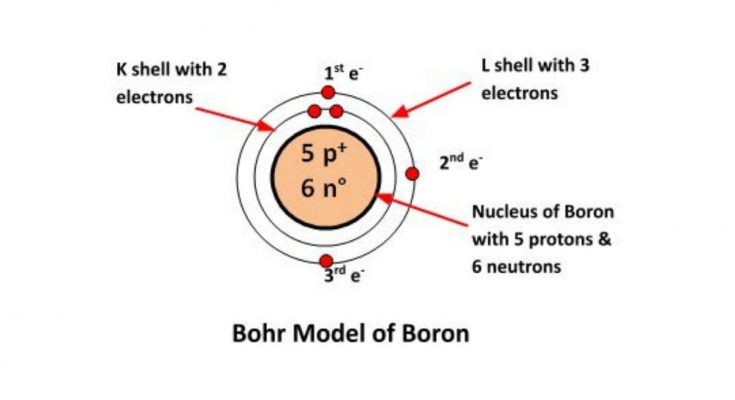 Boron is a group 13th element which is denoted by the chemical symbol B. It is a metalloid and occurs in meteoroids in trace amounts. It is black, lustrous in appearance. It is scarcely found in the universe as well as on the earth’s surface.

On earth, it occurs as water-soluble borate minerals such as borax and kernite. Majorly, boron is used in the manufacturing of fiberglasses, polymers, ceramics, borosilicate glasses, etc.

In this article, we’ll study the Boron Bohr Model and will go through the steps to draw its Bohr Diagram. The boron Bohr model provided new information on the atom and its structure.

The Bohr Model or precisely Rutherford-Bohr model was presented in 1913 by Niel Bohr and Ernest Rutherford.

It was an improved version of the Rutherford model that was revised by Bohr overcoming certain drawbacks and adding a few novel findings.

This concept helps us to understand the structure of an atom, its constituent particles as well as their positions inside the atom.

So, before starting to draw the Bohr model for Boron let’s get familiar with a few keywords:

• Nucleus: This is the core of an atom similar to the sun in the solar system. It comprises neutral neutrons and positively charged protons.

• Protons: These are the positively charged particles that are present inside the nucleus of an atom.

•Neutron: These are the neutral particles present inside an atom that contribute to various properties of that atom.

• Electron: These are the negatively charged particles that revolve around the nucleus of an atom in definite paths known as shells or orbits or energy levels.

• Valence Electron: The electrons present in the farthest orbit of the atom.

As per the Bohr model the shells in which the electrons revolve around the nucleus have definite energies associated with them. That is why they are also known as energy levels.

The boron atom has 6 neutrons and 5 protons in its nucleus, and 5 electrons revolve around the nucleus in two shells named K and L shells.

The Boron family is located in the 13th group of the Periodic table:

The Boron atom along with its atomic number, electronic configuration, and atomic mass is represented as follows in the Periodic table:

Information derived from the Boron box:

• The atomic number of Boron is 5.

• The symbol for representing Boron is B.

• Electronic configuration of Boron is 1s22s22p1.

Now, to draw the Bohr model for Boron we first need to identify the number of different atomic particles that this atom contains.

The number of protons in an atom is always equal to the atomic number of that atom.

Therefore, No. of protons in Boron = Atomic Number of Boron = 5

Also, the number of neutrons in an atom is given by the formula:

Number of neutrons = Atomic mass (rounded to nearest whole number) – No. of Protons

In the case of the Boron atom, the atomic mass is 10.811, after rounding it to the nearest whole number we get 11.

Hence, the nucleus of the Boron atom can be represented as: 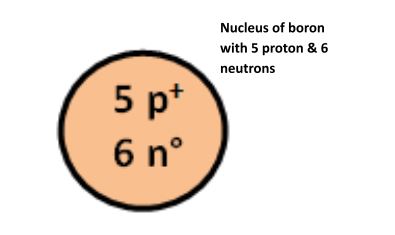 Now, finding the number of electrons in Boron atom,

Therefore, No. of electrons in Boron atom = Atomic number = 5

Maximum number of electrons in a shell (N) = 2n2

The first shell around the nucleus is known as the 1 or K shell. Calculating the maximum number of electrons it can hold:

Therefore, the K shell is allowed to accommodate only 2 electrons. The structure of the atom after adding the K shell to the nucleus appears as follows: 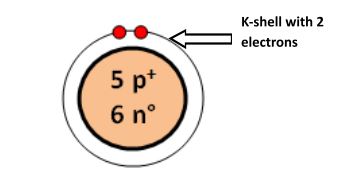 After adding these two electrons we are further left with three more electrons to accommodate. So let’s calculate the maximum number of electrons that can be accommodated in the next shell i.e. L shell.

Hence, the L shell can easily house 8 electrons. However, in the case of Boron, we are only left with 3 electrons so they are placed in the L shell.

In a shell, the placing of electrons begins from the top and they are added in the clockwise direction, at a 90° angle to each other. 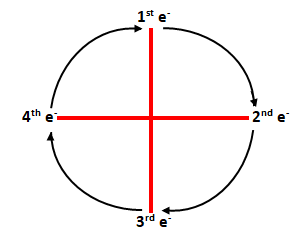 Please note that the above placement criterion is applicable for atoms having up to 4 electrons in this shell.

Now, keeping the above findings in mind let us add electrons to the 2nd or K shell of the Boron atom. The final Bohr model for the Boron atom is given as under: 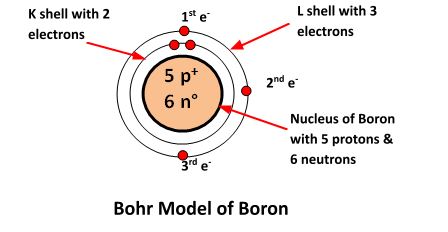 The Bohr model of the atom is still being used today and the only model to surpass its accuracy is the Quantum Mechanical Model.

When the electrons absorb energy they may jump into the higher shell and later after emitting the energy they again fall back to their original energy levels. 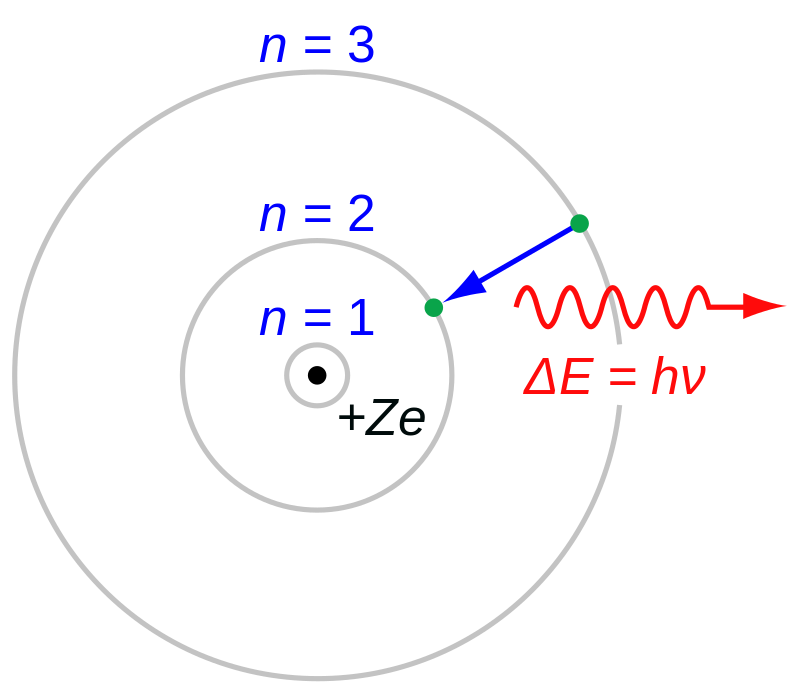 As per the above-drawn Bohr model of the Boron atom, it has two energy levels available for electrons i.e. the electrons around the nucleus are allowed to move in two orbits or shells.

The boron atom consists of 3 electrons in its valence shell i.e. L shell.

This allows us to easily draw the Lewis structure of Boron in which the nucleus is represented using the atomic symbol of the element and the valence shell electrons are presented in the form of dots around the nucleus.

Therefore, the Lewis structure of Boron can be drawn as: 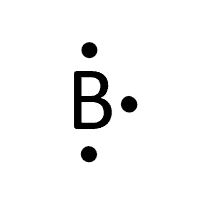 Is BF3 Polar or Nonpolar

• What is the maximum number of electrons that a shell can accommodate?

Answer: The formula for the maximum number of electrons that a shell = 2n2

Therefore, Number of electron for various shell are:

• How is the energy radiated or absorbed by the electrons while moving from one energy level to another calculated?

Where, ΔE = the energy absorbed or radiated

• Calculate the number of valence electrons in the Boron atom using the Bohr model.

Answer: As per the Bohr model the outermost shell of the Boron atom is the L shell that

contains 3 electrons. Therefore, there are 3 valence electrons in the Boron atom.

• What is the electronic configuration of Boron?

A few properties of Boron are listed below:

• It has a rhombohedral crystal structure.

• The electronegativity of Boron on the Pauling scale is around 2.04.

As per the Bohr Model of atom Boron consists of a nucleus containing 6 neutral neutrons and 5 positively charged protons. Also, 5 negatively charged electrons revolve around the nucleus in definite orbits known as energy levels or shells.

The number of neutrons is calculated by rounding up the atomic mass to the nearest whole number and then subtracting the number of protons from it.

The number of electrons that can be accommodated in any shell of an atom can be calculated using the formula2n2, where n is the number of shells.

The electronic configuration of Boron is 1s22s22p1.