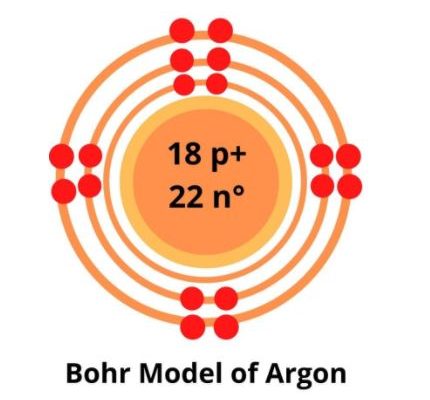 Argon is a group 18th element having atomic number 18. It is denoted by the symbol Ar and is a noble gas. It is also the third most abundant gas present in the atmosphere of the earth. Around 1.288% by mass of argon is present in the air, which can be isolated through fractional distillation.

It serves as the primary source of argon for industries. Argon is majorly used in industries where an inert atmosphere is required such as in the preparation of titanium.

In this article, we will study the Bohr diagram of argon with step by steps discussion.

The Rutherford model of the atom proposed in 1911 could not explain the stability of electrons while moving around the nucleus.

As per the classical mechanics and electromagnetic theory such particles could not remain stable and would lose energy.

Niel Bohr modified this model and presented the improvised Bohr-Rutherford model of the atom in 1913. In this model, he postulated that every electron moves in a pre-decided orbit having fixed size and energy.

The Bohr model of atom defines the atomic structure of elements through a pictorial representation illustrating all the atomic particles viz. electrons, protons, and neutrons.

Before we dig deep into the Bohr model of the atom we should first understand a few important terms related to this model used in describing the structure of an atom.

• Nucleus: The centre or core of the atom comprising neutrons and protons. It derives its positive charge owing to the positively charged protons.

• Protons: These are the positively charged entities present in the nucleus of an atom and are represented through the symbol p+.

• Neutrons: These are the neutral entities present inside the nucleus of an atom and are responsible for most physical properties of atoms. These are denoted by using the symbol n°.

• Electrons: The negatively charged entities that move in fixed circular paths orbiting the nucleus of an atom. These are denoted by the symbol e–.

The location of an electron with respect to the nucleus depends upon the energy of the electron.

• Shells: The path taken by the electrons around the nucleus are termed as shells or orbits. Only a fixed number of electrons are allowed to follow a particular orbit owing to the difference in their energy and capacity of the shell to accommodate the electrons.

In the Bohr model of the atom, the shells are named as K, L, M, N, etc., or 1, 2, 3, 4, etc. This number increases away from the nucleus. The energy of the electrons also increases as the number of shells increases. This is why the shells are also known as energy levels.

Therefore, the electrons located in the K-shell i.e. the shell closest to the nucleus are said to be in the ground state and carry minimum energy.

The electrons located in the outermost shell carry maximum energy and are also referred to as valence electrons. These electrons are responsible for the formation of bonds.

The electrons are also allowed to hop from lower to higher as they gain energy or fall from higher to lower energy levels as they lose their energy.

The argon atom contains 22 neutrons, 18 protons, and 18 electrons. The electrons revolve around the nucleus in K, L, and M shells.

Argon is a noble gas located in group 18 of the periodic table: 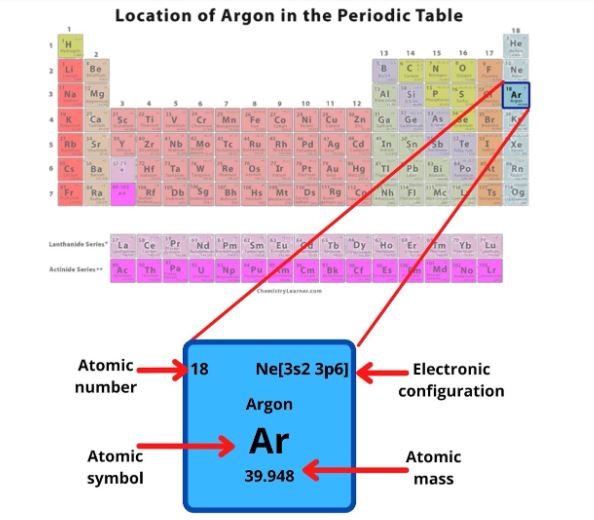 The information that we can derive from the above-mentioned Argon box is as follows:

• The electronic configuration of chlorine is [Ne] 3s23p6.

• The chemical symbol of chlorine is Ar.

Now, using the above information we will draw the Bohr atomic model for the argon atom.

For this, we will first have to calculate the number of atomic species. Let us begin with protons.

In the case of the argon atom, the atomic number is 18.

Therefore, for the argon atom, the number of protons = atomic number = 18

Moving on, we will now calculate the number of neutrons in the argon atom.

The formula for calculating the number of neutrons present in an atom is given below:

Now, using the information from the argon box we know that the atomic mass of argon is 39.948.

After rounding it up to the nearest whole number we get 40.

Also, as calculated above, the number of protons in the argon atom is 18.

Now, putting these values in the above-mentioned formula:

Therefore, the number of neutrons in the argon atom = 22 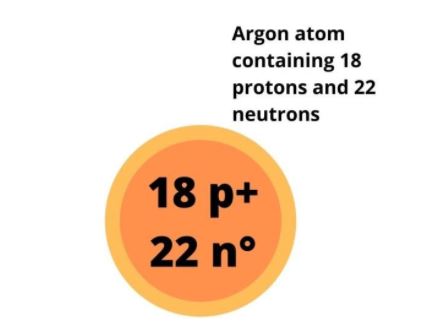 In this diagram, the p+ represents protons and n° represents neutrons.

Now, moving on to add the shells to the argon nucleus we will calculate the number of electrons.

Therefore, in the case of argon atoms,

The maximum number of electrons that can be housed in a particular shell is given by 2n2, where n refers to the number of shells.

Now, applying this formula for the argon atom, we will calculate the number of electrons for each shell, separately.

After adding these two electrons to the first shell the atom appears as follows: 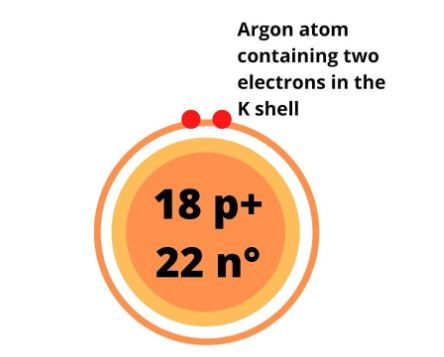 Post this, the electrons are to be added to the L shell of the argon atom.

Let us calculate the number of electrons that can be accommodated in the L shell.

Hence, the L shell has the capacity to house 8 electrons.

The important point to be mentioned at this stage is that for the K shell there are only two electrons that are placed close to it each other. However, from the L shell onwards, as the number of electrons increases the arrangement pattern changes.

The electrons are now arranged in a group of four, in a clockwise direction. The first four electrons are positioned at 90° to each other. This angle keeps decreasing as the number of electrons increases.

Therefore, the first four electrons in the L shell of the argon atom are arranged as follows: 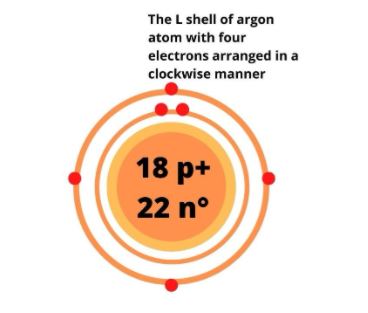 The remaining four electrons are now added to the L shell, again in a clockwise manner.

After this the argon atom is now represented as: 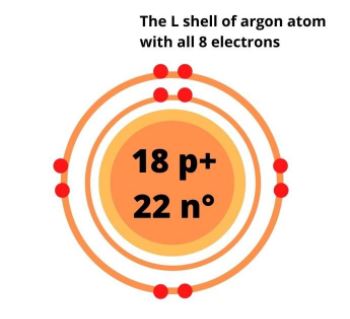 Now, we are left with 8 more electrons which will be accommodated in the M shell.

Therefore, we will calculate the number of electrons that can be accommodated in the M shell.

Hence, a total of 18 electrons are allowed to be housed in the M shell.

As only 8 electrons are left for the argon atom, we can accommodate all of them in the M shell.

The first four electrons again will be added in a clockwise manner. 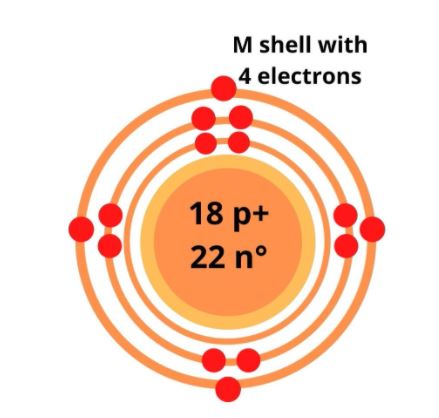 Finally, after adding all the eight electrons to the M shell, we get the Bohr model of the argon atom as drawn below. 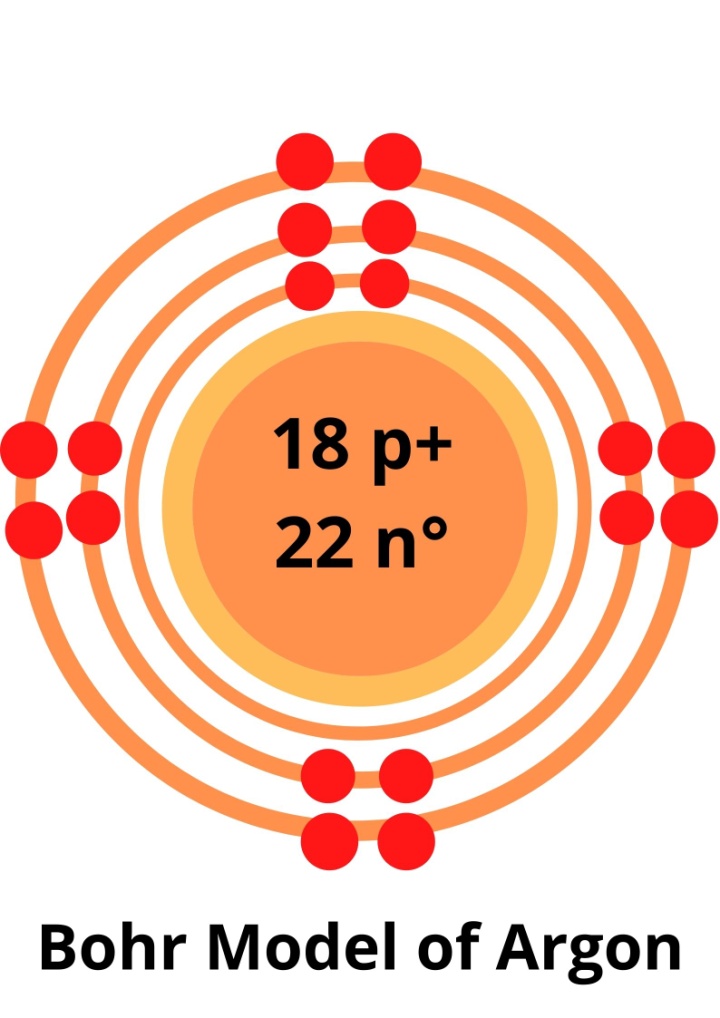 Hence, the final Bohr model of the argon atom consists of 18 protons and 22 neutrons inside the nucleus, and 18 electrons revolving around the nucleus.

The Lewis structure or electron dot structure is the illustration of the atom of an element along with its valence electrons. The nucleus is represented with the atomic symbol of the element while electrons are represented using dots.

As discussed above, the argon atom consists of 8 electrons in its valence shell i.e. M shell. Therefore, the Lewis structure of argon is represented as follows: 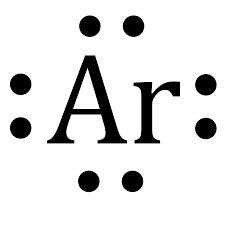 A few important properties of argon are listed below:

• It is a colourless gas that appears violet under the influence of an electric field.

• The solubility of argon in water is similar to nitrogen and 2.5 times more than nitrogen.

Below is the video attached for the bohr model of Argon.

As per the Bohr model of an atom, the argon atom consists of 18 protons and 22 neutrons in the nucleus while 18 electrons revolve around the nucleus.